Elsie Doetsch resisted going on an Honor Flight for years. The flights, sponsored locally by Twin Tiers Honor Flight, transport veterans to Washington, DC, to honor their service, allowing them to visit memorials and reflect on their time in the armed services at no cost to the veteran. Doetsch, who served in the U.S. Army from January 1975-June 1978, was reluctant to go on the trip because each veteran is attended by a guardian and she worried that she wouldn’t be comfortable with the person chosen. What changed Doetsch’s mind is when she learned Bridget Traver (who has been a guardian on seven Honor Flight trips) would be hers for Mission 14. 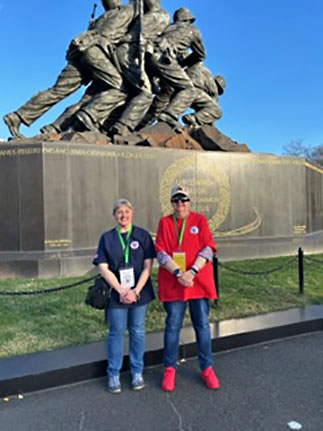 “Bridget Traver had been trying for several years before COVID to convince me to go,” Doetsch said in an e-mail interview. “This past January, when I had one of my dogs at the vet’s for a check-up, Bridget told me about the historic all female Twin Tier Honor Flight scheduled for November. It was to be an all female veteran, guardian and staff trip. I have been acquainted with Bridget from taking my dogs to the animal hospital where she has worked for 26 years. I told her if someone like her were my guardian, I would feel comfortable going. Without hesitation, she told me she would be my guardian.”

She noted that “if it had not been for Bridget’s perseverance, encouragement and willingness to be my guardian I most likely would not have gone. Throughout the trip, we shared laughs and tears. I cannot thank Bridget enough. She helped to make this Honor Flight trip, Mission 14, more meaningful. I asked Bridget at one point, ‘When does your commitment to me end?’ I meant to ask. ‘When does your responsibility to me end when we get back?’ Her quick reply was, ‘Never, you will always be my veteran!’”

Doetsch found the trip a moving and important experience. “The trip was all I expected and more,” she said, “From start to finish, it was all meaningful. The camaraderie on the bus (how can you not have fun on a bus with around 50 women) and throughout the trip was a lot of fun and laughs. Learning the stories of other veterans was inspiring.”

She finds it impossible to pick one experience as the most important. “Every step of the trip was significant and telling,” Doetsch added. “Every memorial evoked emotions and some tears. How can one not become overwhelmed with emotion at ‘The Wall’ [the Vietnam Veterans Memorial] – the simplicity of the design of the long black wall with all its panels with the names of over 58,000 men and women who sacrificed their lives for our country? While at the wall, Bridget helped me find the name of a classmate who died in Vietnam in 1971. She took a picture of me doing a rubbing of his name. After witnessing the changing of the honor guard and a wreath laying at the Tomb of the Unknown Soldier at Arlington Cemetery, I felt if you are not overcome with emotion there is something wrong with you, especially when hearing ‘Taps’ being played. A Korean War veteran from our group had the honor of laying the wreath from our group, Twin Tier Honor Flight, Mission 14.”

However, one thing did stand out. Doetsch served during the Vietnam War, although she was not assigned there. (Her assignments included stints with the 2nd Armored Division in Fort Hood, TX, and with the 172nd Infantry Brigade in Alaska.) “At the dinner on Saturday night, it meant a lot to all of us Vietnam veterans who served on active duty between November 1, 1955, and May 15, 1975, regardless of the location, to receive a Vietnam lapel pin, commemorating and recognizing our service,” she added. “This was a result of a proclamation signed by President Barack Obama [on May 25, 2012], which recognized May 28, 2012, to November 11, 2025, as the 50th Commemoration of the Vietnam War.”

The experience did not end when they left Washington, DC. “When we arrived home, it was overwhelming and emotional to each of the veterans that, as we stepped off the bus, we were welcomed back by a cheering crowd holding signs and waving flags,” she said. “As I stepped off the bus, it was announced, ‘Welcome home, U. S. Army Vietnam veteran Elsie Doetsch.’”